From very humble beginnings, the people of St. Mary and St. Bartholomew’s, along with the various Rectors, have always been conscious of the need, above all else, to make God’s love known, and to meet the needs of people who seek comfort and refuge in the church’s many ministries.  To that end, “Look forward and not back, look up and not down, and lend a helping hand” (words originally put forward by Archdeacon W.O. Raymond in the years 1861-1883), has always been, and will continue to be, the motto of this caring congregation.

The History of St. Mary’s Church 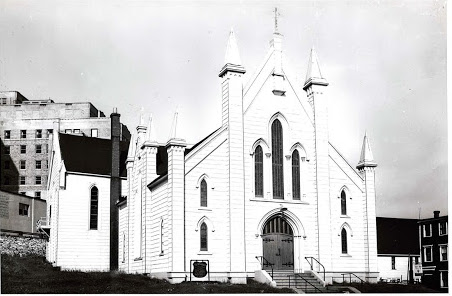 St. Mary’s was originally located on Waterloo Street in Saint John. The building was consecrated on Ascension Day, May 9th, 1861. It was built to meet the needs of the heavily populated area around Haymarket Square.  Many of the people living in the area worked in the shipbuilding industry for years which lined the shoreline at that time.  It was not uncommon to find four or more families living in large tenements in the area.  From the outset, St. Mary’s was built as a “free church,” accessible to the poor and depending solely for its support on the free-will offering of its congregation, rather than on the money raised from pew rentals.

In 1966, representatives of the Saint John General Hospital which occupied the property next to St. Mary’s, made an offer to purchase the buildings and associated property, to facilitate the expansion of the hospital.  The congregation was then faced with a huge and most difficult decision; for instance, the old buildings were facing high maintenance costs and needed renovations, the congregation had now diminished as the population moved outward, and expenses could not be met. But where would the people go to worship?

The History of St. Bartholomew’s Church

The amalgamation of St. Mary’s and St. Bartholomew’s became officially effective on October 1st, 1967.  Services were held in the basement of the new building until the furnishings from St. Mary’s could be set in place and the building completed. The first Service in the completed sanctuary was held on Christmas Eve, 1967.

Through the years, the people of this lively and caring congregation have had many difficult decisions to make, not the least of which being the de-consecration of two buildings to create one large building, which over the years has also seen enlargement and expansion to meet new and growing needs.